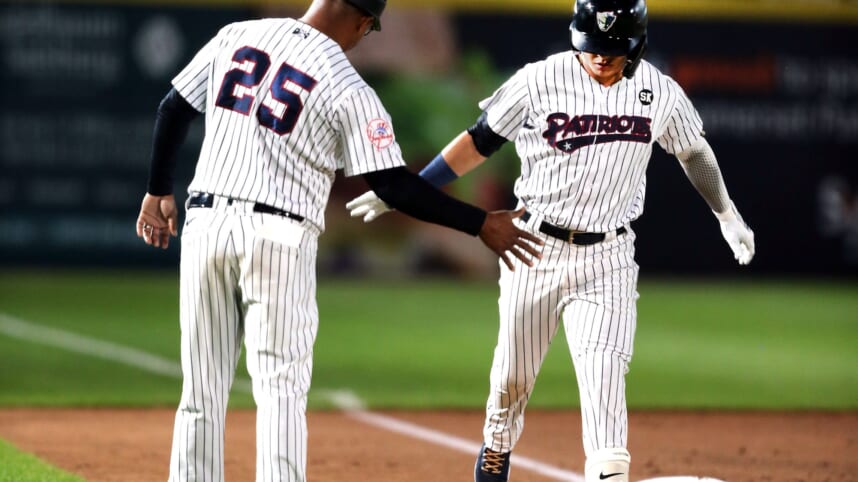 When you think of the Yankees’ top prospects down in the minors, a lot of names come up. At the forefront is the future star shortstop Anthony Volpe, who’s had an OPS over 1.000 in his first stint at Triple-A with Scranton.

Jason Dominguez has continued to impress with Hudson Valley at High-A, Trey Sweeney recently got promoted to Double-A with the Somerset Patriots, and the tandem of Everson Pereria and Austin Wells have posted great numbers with Somerset.

Under the radar, 3B Andres Chaparro has crushed with the Somerset Patriots, putting up video game numbers and showing he’s one of the most formidable young bats in the Yankees’ farm system. He wasn’t even ranked in the top 30 among Yankee prospects coming into the season, but he’s forcing his way to a Triple-A promotion and eventually reps with the Major League team in 2023.

Andres Chaparro has been one of the best power hitters at the Double-A level in 2022, an approach change that came post-pandemic. He hit just 17 HRs and slugged just .357 in 213 games between his debut in 2016 and the 2019 season. He looked like a prospect who’d fade away and struggle to reach the higher levels of the minors, but then in 2021, as he began his season with the Tampa Tarpons in Single-A, he posted a strong .812 OPS and slugged a modest .435. One promotion to High-A later, and he became one of the most powerful hitters in Minor League Baseball.

Since that promotion to High-A, Chaparro has slugged a whopping .561 with 25 HRs and 21 2Bs in 102 games, a pace of over 35 HRs if he had played 150 games. The power has only improved since going to Double-A Somerset, as he’s putting on a show with towering blasts and video game numbers:

With a 40 HR and 40 2B pace over 150 games, Chaparro’s been on a roll crushing the competition. He leads the Somerset Patriots in a lot of offensive categories, and that’s a team that has Austin Wells and Everson Pereria and also rostered Anthony Volpe for most of the season. He even has this 117 MPH scorched line drive from the Arizona Fall League last season, which would be the 10th highest Max Exit Velocity this season.

The power is off the charts, but is Chaparro, just a power-hungry bat with not much else to provide? Well, the numbers dictate otherwise.

Strong Presence in the Box With Steady Defense:

Andres Chaparro’s plate discipline has gone overlooked at the Double-A level. Most power hitters tend to struggle with making consistent contact, and yet Chaparro doesn’t share this same issue with a lot of extremely powerful hitters.

While this is limited data that doesn’t detail how often Chaparro expands the zone and chases at balls, it does show us that Chaparro does not swing and miss nearly as much as one would anticipate a big slugger to whiff.

While he isn’t going to run a K% that’s almost under 20% at the MLB level, he could keep the K% at roughly league average, which would mean he makes a lot of contact without sacrificing the high-quality of his contact. . This presence in the box means his approach is strong and gives him that “hitterish” quality. Hopefully, it translates to the Major League level, but the projections support it definitely could (more on that later).

His defense has also been surprisingly strong at Double-A, as he has posted 2 Davenport Defensive Runs. While the Yankees have better defensive 3Bs at the MLB level (Donaldson, IKF, LeMahieu), Chaparro can provide a solid glove that should allow him to stay at the position and not be a butcher with the glove that can’t be left at the position. The defensive aspect of his game is difficult to grasp considering how limited MiLB data is defensively and the lack of public scouting reports that talk about his glove, but he has the ability to provide positive value defensively and be a well-rounded corner infielder.

The projections for Andres Chaparro look great, especially considering he hasn’t played at the AAA level yet. Steamer has him putting up strong MLB numbers, numbers that rank very well among position players on the Yankees. When you extrapolate those numbers over 600 PAs (450 PAs for Catchers), it has him as one of the Yankees best position player options. right now:

While projections need to be taken with a grain of salt that rookies tend to have less predictable results than established MLB players with larger data sets, but this is still wildly impressive. Anthony Volpe has a projected 115 wRC+ and 3.9 fWAR/600, and he’s considered a slam-dunk top 10 prospect in all of baseball. Chaparro should not be left out of the discussion and the group with prospects like Austin Wells, Everson Pereria, Oswald Peraza, Trey Sweeney, and Jason Dominguez. He’s put up the numbers, he has the talent, and he’s proving to the prospect world that he deserves to have his name out there.